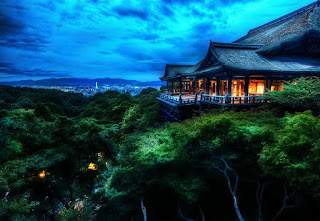 WHAT IS A MAN BY TOM CHIARELLA

What Is a Man?


A man carries cash. A man looks out for those around him — woman, friend, stranger. A man can cook eggs. A man can always find something good to watch on television. A man makes things — a rock wall, a table, the tuition money. Or he rebuilds — engines, watches, fortunes. He passes along expertise, one man to the next. Know-how survives him. This is immortality. A man can speak to dogs. A man fantasizes that kung fu lives deep inside him somewhere. A man knows how to sneak a look at cleavage and doesn't care if he gets busted once in a while. A man is good at his job. Not his work, not his avocation, not his hobby. Not his career. His job. It doesn't matter what his job is, because if a man doesn't like his job, he gets a new one.

A man can look you up and down and figure some things out. Before you say a word, he makes you. From your suitcase, from your watch, from your posture. A man infers.

A man owns up. That's why Mark McGwire is not a man. A man grasps his mistakes. He lays claim to who he is, and what he was, whether he likes them or not.

Some mistakes, though, he lets pass if no one notices. Like dropping the steak in the dirt.

A man loves the human body, the revelation of nakedness. He loves the sight of the pale breast, the physics of the human skeleton, the alternating current of the flesh. He is thrilled by the snatch, by the wrist, the sight of a bare shoulder. He likes the crease of a bent knee. When his woman bends to pick up her underwear, he feels that thrum that only a man can feel.

A man doesn't point out that he did the dishes.

A man looks out for children. Makes them stand behind him.

A man knows how to bust balls.

A man has had liquor enough in his life that he can order a drink without sounding breathless, clueless, or obtuse. When he doesn't want to think, he orders bourbon or something on tap.

A man welcomes the coming of age. It frees him. It allows him to assume the upper hand and teaches him when to step aside.

He does not rely on rationalizations or explanations. He doesn't winnow, winnow, winnow until truths can be humbly categorized, or intellectualized, until behavior can be written off with an explanation. He doesn't see himself lost in some great maw of humanity, some grand sweep. That's the liberal thread; it's why men won't line up as liberals.

A man gets the door. Without thinking.

He stops traffic when he must.

A man resists formulations, questions belief, embraces ambiguity without making a fetish out of it. A man revisits his beliefs. Continually. That's why men won't forever line up with conservatives, either.

A man knows his tools and how to use them — just the ones he needs. Knows which saw is for what, how to find the stud, when to use galvanized nails.

A miter saw, incidentally, is the kind that sits on a table, has a circular blade, and is used for cutting at precise angles. Very satisfying saw.

He knows how to lose a month, also.

A man listens, and that's how he argues. He crafts opinions. He can pound the table, take the floor. It's not that he must. It's that he can.

A man is comfortable being alone. Loves being alone, actually. He sleeps.

A man loves driving alone most of all.

Style — a man has that. No matter how eccentric that style is, it is uncontrived. It's a set of rules.

He understands the basic mechanics of the planet. Or he can close one eye, look up at the sun, and tell you what time of day it is. Or where north is. He can tell you where you might find something to eat or where the fish run. He understands electricity or the internal-combustion engine, the mechanics of flight or how to figure a pitcher's ERA.

A man does not know everything. He doesn't try. He likes what other men know.

A man does not wither at the thought of dancing. But it is generally to be avoided.

A man watches. Sometimes he goes and sits at an auction knowing he won't spend a dime, witnessing the temptation and the maneuvering of others. Sometimes he stands on the street corner watching stuff. This is not about quietude so much as collection. It is not about meditation so much as considering. A man refracts his vision and gains acuity. This serves him in every way. No one taught him this — to be quiet, to cipher, to watch. In this way, in these moments, the man is like a zoo animal: both captive and free. You cannot take your eyes off a man when he is like that. You shouldn't. The hell if you know what he is thinking, who he is, or what he will do next 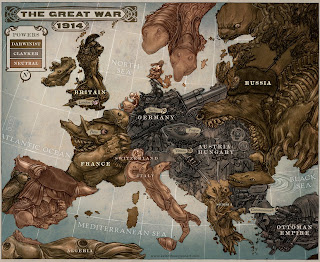 From Leviathan by Scott Westerfeld.

Germany is a massive military machine with weapons aimed outwards to all surrounding countries. It points threateningly at Britain, not so much as a sign of direct aggression, but more as an indicator that it was now Germany’s turn to start a grand global Empire to challenge the world’s current one.

Austria Hungary is an aggressive armoured giant, teetering on shoddy foundations. It is also the primary aggressor in a land grab against Serbia, with two bayonets piercing the border.

The Ottoman empire is a teetering automaton, collapsing under the weight of a paranoid and ungainly spying network that gazes at Europe through many lenses and spy glasses.

The Swiss watch ticks away the time, comfortable to wait it all out.

Britain is an militaristic lion with a Roman Imperial italic-type helmet. It sits upon a mound of riches gathered from its Empire.

France’s elephant beast (wearing the French kepi they started the war with before adapting their firefighter helmets) is influenced by the Elephantine Collossus built for the Universal Exhibition of 1889 in Paris (later it ended up going to the Moulin Rouge.)

Russia is a huge imperialist bear, rotting and filled with maggots.

Serbia’s imagery is an indicator of the huge amounts of civilian deaths and suffering they’ll find themselves subject to.

Norway and Sweden are both Scandinavian trolls in the style of John Bauer, an inspirational illustrator from the era who produced a lot of phenomenal work during the war.

Portugal is a parrot for the Entente trying to goad a slumbering Spain into the war.

Ireland looks askance to Britain and brandishes a shillelagh. An indicator of their very rough relationship at the time, and of their upcoming involvement with the Central powers.

Italy is a clutch of snakes with intents on the Central powers despite existing agreements. A foreshadowing of their arrangements at the secret 1915 Treaty of London where they were promised land in exchange for involvement. It was heavily influenced by Italian Prime Minister, Antonio Salandra’s open policy of serving Italy’s "divine self-interest." 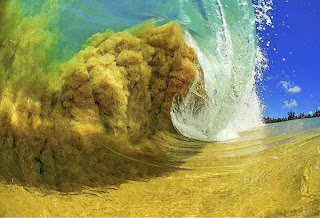 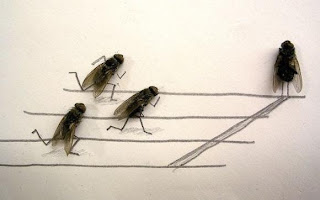 THE DEVIL AND DANIEL JOHNSTON

Ya no les cuento más.

List of films about mathematicians
This is a list of feature films that include a mathematician (or scientist who uses a lot of math) as one of the main characters.

To Sir, with Love (1967) - Engineer Mark Thackeray (Sidney Poitier) becomes a teacher. Straw Dogs (1971) - David Sumner (Dustin Hoffman) is an American mathematical physicist who moves to England, where he and his wife are violently harassed by locals. It's My Turn (1980) - A mathematics professor (Jill Clayburgh) falls in love with her father's bride's son (Michael Douglas). Stand and Deliver (1988) - Based on the true story of math teacher Jaime Escalante, who inspired the students in a school in a Hispanic neighborhood. Sneakers (1992) - An eclectic team is assembled to steal a code-breaking box developed by a rogue mathematician.
I.Q. (1994) - Albert Einstein (Walter Matthau) helps a young man (Tim Robbins) pretend to be a physicist in order to catch the attention of Einstein's niece (Meg Ryan). Antonia's Line (1995) - A genealogical "line" of five generations of women includes a child prodigy, Thérèse, who grows up to be a mathematician. Infinity (1996) - A story about Nobel Prize-winning physicist Richard Feynman (Matthew Broderick). The Mirror Has Two Faces (1996) - A math professor (Jeff Bridges) marries a literature professor (Barbra Streisand), but they want different things from the relationship. Good Will Hunting (1997) - Janitor Will Hunting (Matt Damon) begins to turn his life around with the help of a psychologist (Robin Williams) and a Fields Medal-winning professor (Stellan Skarsgård). Pi (1998) - A mathematician searches for the number that underlies all of nature. A Beautiful Mind (2001) - A fictional account based loosely on the life of mathematician John Nash (Russell Crowe), who made a breakthrough that wins him the Nobel Prize in economics. Enigma (2001) - A story of romantic and psychological intrigue set in Bletchley Park during the World War II effort to crack the German Enigma machine. 21 Grams (2003) - An accident changes many lives, including that of a critically ill mathematics professor (Sean Penn). Proof (2005) - A former student (Jake Gyllenhaal) of a recently deceased, brilliant mathematician (Anthony Hopkins) finds a notebook in his office containing a proof of an important theorem, but the mathematician's daughter (Gwyneth Paltrow) claims it is hers. The ensuing dispute is complicated by signs that she may have inherited her father's mental illness and a burgeoning romance. Raising Genius (2004) - The film is about a boy (Justin Long) who locks himself in the bathroom to work out math equations on the shower wall. This article is licensed under the GNU Free Documentation License. It uses material from the Wikipedia article "List of films about mathematicians". This entry is a fragment of a larger work. Link may die if entry is finally removed or merged.